This is the list of the best airport of the world for Skytrax (2016):

We have selected these top five. (Texts by Wikipedia & others). 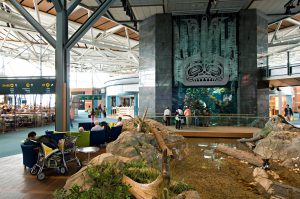 Vancouver International Airport is located on Sea Island in Richmond, British Columbia, Canada, about 12 km (7.5 mi) from Downtown Vancouver. It is the second busiest airport in Canada by aircraft movements (316,182) and passengers (20.3 million), behind Toronto Pearson International Airport. It has non-stop flights daily to Asia, Europe, Oceania, the United States, Mexico and other airports within Canada. The airport has won several notable international best airport awards; it won the Skytrax Best North American Airport award in 2007 and 2010 through 2016.The airport also made the list of top 10 airports in the world for the first time in 2012. It is a hub for Air Canada as well as a focus city for WestJet. It is also an operating base for Air Transat. Vancouver International Airport is one of eight Canadian airports that have US Border Preclearance facilities. It is also one of the few major international airports to have a terminal for scheduled floatplanes. 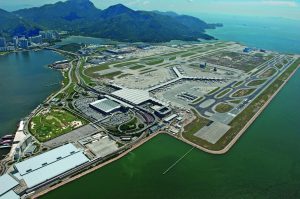 Hong Kong International Airport is the main airport in Hong Kong. It is located on the island of Chek Lap Kok, which largely comprises land reclaimed for the construction of the airport itself. The airport is also colloquially known as Chek Lap Kok Airport (赤鱲角機場), to distinguish it from its predecessor, the closed Kai Tak Airport. The airport has been in commercial operation since 1998, replacing the Kai Tak Airport. It is an important regional trans-shipment centre, passenger hub and gateway for destinations in Mainland China (with 45 destinations) and the rest of Asia. The airport is the world’s busiest cargo gateway and one of the world’s busiest passenger airports. It is also home to one of the world’s largest passenger terminal buildings (the largest when opened in 1998).

The futuristic international airport of Hong Kong has a perfect style to represent ‘The Pearl of the Orient’. Built on the island and only 30 minutes by train from the city center, the list of activities available at the airport include a golf track with 9 holes, the largest IMAX cinema in the whole city and a gym with a computer can simulate a basketball field. Do not be surprised when you cross the exhibition of art dedicated to local legends Bruce Lee and Jackie Chan. 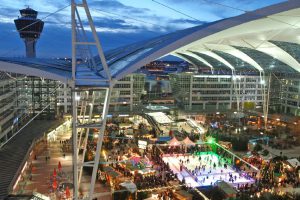 Munich Airport, German: Flughafen München, is a major international airport near Munich, the capital of Bavaria. It is the second busiest airport in Germany in terms of passenger traffic behind Frankfurt Airport, and the seventh busiest airport in Europe, handling 40,9 million passengers in 2015. It is the world’s 15th busiest airport in terms of international passenger traffic, and was the 34th busiest airport worldwide in 2015. As of March 2015, the airport features flights to 228 destinations in 66 countries. Munich Airport serves as the secondary hub for Lufthansa including Lufthansa Regional and its Star Alliance partners besides Frankfurt. The airport is located 28.5 km (17.7 mi) northeast of Munich near the old city of Freising and is named in memory of the former Bavarian Prime Minister Franz Josef Strauss.

A big problem that arises when you are forced to make a long stop at the airport is like making children happy. If only there was a space in which they could run at will at a playground with climbing frames, watching planes land from an observation deck or enjoy a game of mini-golf … Well, you can do this in Monaco airport. There is a huge space that is perfect for all passengers who try to prevent choking of the terminal. In addition, if you are in summer transition, you can even join the free surf sessions in the machine that produces waves in the park. Do you want to refresh yourself with a cold drink or eat sausages? With more than 50 bar at your disposal you can taste the flavors of Bavaria without having to even leave the airport. Time flies when you’re having fun. 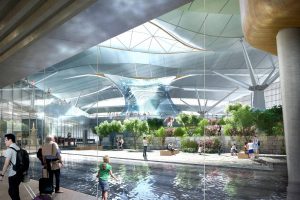 The airport has a golf course, spa, private sleeping rooms, an ice skating rink, a casino, indoor gardens and a Museum of Korean Culture. Airport authorities claim that average departure and arrival takes 19 minutes and 12 minutes respectively, as compared to worldwide average of 60 minutes and 45 minutes respectively, ranking it among of the fastest airports in the world for customs processing. Its duty-free shopping mall has been rated the world’s best for three years in a row in 2013 by Business Traveller. Incheon International Airport also claims that it has only a 0.0001% baggage mishandling rate.

The airport holds a record of being ranked the Best Airport Worldwide for 11 consecutive years by the Airports Council International (ACI)’s Airport Service Quality Award from 2005 to 2016, and has also been rated the world’s best among airports of its size (25–40 million passengers) and region (Asia-Pacific) since 2012 due to the institution’s decision to discontinue the Best Airport Worldwide category.

Do not be fooled by its futuristic look and its artificial ice rink, Incheon International Airport (the largest airport in South Korea), everything revolves around the tradition and national pride. The star of the exhibition is the Museum of Korean Culture, which houses an impressive collection of garments, tablets and tools with more than 5,000 years old. Outside the boundaries of this wonderful exhibition, you’ll see the Korean culture in action with real and performances in a mix of musical styles ranging from traditional processions Sanjo chamber music at the K-Pop. 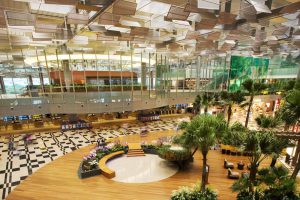 Singapore Changi Airport, or simply Changi Airport, is the primary civilian airport for Singapore, and one of the largest transportation hubs in Southeast Asia. It is currently the World’s Best Airport (Skytrax 2016),[4] for the fourth consecutive year and counting (Skytrax’s World’s Best Airport 2013-2016) and is one of the world’s busiest airports by international passenger traffic and cargo traffic. The airport is located in Changi, at the eastern end of Singapore, approximately 17.2 kilometres (10.7 mi) northeast from Marina Bay (in Singapore’s Downtown Core), on a 13-square-kilometre (5.0 sq mi) site. It is operated by Changi Airport Group and it is the home base of Singapore Airlines, Singapore Airlines Cargo, SilkAir, Scoot, Tigerair, Jetstar Asia Airways and BOC Aviation.

After winning the award of “The best airport in the world” for three years in a row, the Changi Airport in Singapore is so wonderful to be envied by all other airports. Spread over three huge terminals, Travelers will spend time with a dip in the pool on the terrace, a walk in the Butterfly Garden or watch a movie in the free movie theater open 24 hours. There’s even a “Tree Social” where you can share with the world your photos and favorite videos collected during the holidays. Last call for the flight? No problem. Terminal 3 has a highest slide 4 floors (the highest of all Singapore) that allows you to hurtle towards your flight in an instant.