Top Five – The best movies of all time

Home » Featuring » Top Five – The best movies of all time

It ‘s very difficult to list the best films of all time. If you look on the internet you will find that any analysis or market research identifies not the same movies. We have tried to choose five films that represent different ages and different types. Here’s the list of the films that we believe are the most beautiful, the most important, the most significant of all time. The order The texts are freely taken from Wikipedia.com. The order is chronological 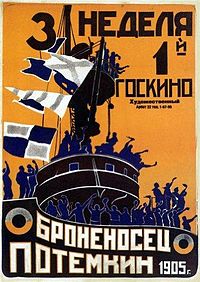 It presents a dramatized version of the mutiny that occurred in 1905 when the crew of the Russian battleship Potemkin rebelled against their officers. Battleship Potemkin was named the greatest film of all time at the Brussels World’s Fair in 1958.

The film is set in June 1905; the protagonists of the film are the members of the crew of the Potemkin, a battleship of the Imperial Russian Navy’s Black Sea Fleet. Eisenstein divided the plot into five acts, each with its own title: Act I: Men and Maggots, Act II: Drama on the Deck, Act III: A Dead Man Calls for Justice, Act IV: The Odessa Steps, Act V: One against all

Gone with the Wind is a 1939 American epic historical romance film adapted from Margaret Mitchell’s 1936 novel Gone with the Wind. It was produced by David O. Selznick of Selznick International Pictures and directed by Victor Fleming. Set in the American South against the backdrop of the American Civil War and Reconstruction era, the film tells the story of Scarlett O’Hara, the strong-willed daughter of a Georgia plantation owner, from her romantic pursuit of Ashley Wilkes, who is married to his cousin, Melanie Hamilton, to her marriage to Rhett Butler. The leading roles are portrayed by Vivien Leigh (Scarlett), Clark Gable (Rhett), Leslie Howard (Ashley), and Olivia de Havilland (Melanie). At the 12th Academy Awards, it received ten Academy 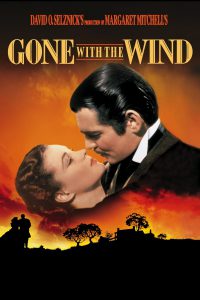 Awards (eight competitive, two honorary) from thirteen nominations, including wins for Best Picture, Best Director (Fleming), Best Adapted Screenplay (posthumously awarded to Sidney Howard), Best Actress (Leigh), and Best Supporting Actress (Hattie McDaniel, becoming the first African-American to win an Academy Award). It set records for the total number of wins and nominations at the time. The film was immensely popular, becoming the highest-earning film made up to that point, and retained the record for over a quarter of a century. When adjusted for monetary inflation, it is still the most successful film in box-office history. Gone with the Wind has been criticized as historical revisionism glorifying slavery, but nevertheless, it has been credited for triggering changes to the way African-Americans are depicted cinematically. It was re-released periodically throughout the 20th century and became ingrained in popular culture. The film is regarded as one of the greatest films of all time; it has placed in the top ten of the American Film Institute’s list of top 100 American films since the list’s inception in 1998, and in 1989, the United States Library of Congress selected it for preservation in the National Film Registry.

Vertigo is a 1958 American psychological thriller film directed and produced by Alfred Hitchcock. The story was based on the 1954 novel D’entre les morts (From Among the Dead) by Boileau-Narcejac. The screenplay was written by Alec Coppel and Samuel A. Taylor. The film star 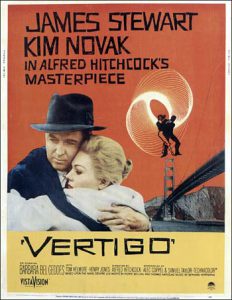 s James Stewart as former police detective John “Scottie” Ferguson. Scottie is forced into early retirement because an incident in the line of duty has caused him to develop acrophobia (an extreme fear of heights) and vertigo (a false sense of rotational movement). Scottie is hired by an acquaintance, Gavin Elster, as a private investigator to follow Gavin’s wife Madeleine (Kim Novak), who is behaving strangely. Vertigo received mixed reviews upon initial release, but is now often cited as a classic Hitchcock film and one of the defining works of his career. Attracting significant scholarly criticism, it replaced Citizen Kane (1941) as the best film ever made in the 2012 British Film Institute’s Sight & Sound critics’ poll.[2] In 1996, the film underwent a major restoration to create a new 70mm print and DTS soundtrack. It has appeared repeatedly in polls of the best films by the American Film Institute, including a 2007 ranking as the ninth-greatest American movie of all time.

To Kill a Mockingbird is a 1962 American drama film directed by Robert Mulligan. The screenplay by 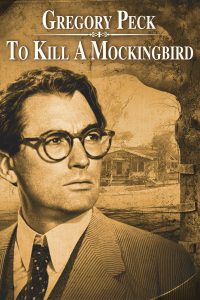 Horton Foote is based on Harper Lee’s 1960 Pulitzer Prize-winning novel of the same name. It stars Gregory Peck as Atticus Finch and Mary Badham as Scout. The film, considered to be one of the best ever made, received overwhelmingly positive reviews from critics. A box-office success, it earned more than 10 times its budget.

The film won three Academy Awards, including Best Actor for Peck, and was nominated for eight, including Best Picture. In 1995 the film was listed in the National Film Registry. It also ranks twenty-fifth on the American Film Institute’s 10th anniversary list of the greatest American movies of all time. In 2003, AFI named Atticus Finch the greatest movie hero of the 20th century.

The Godfather is a 1972 American crime drama directed by Francis Ford Coppola and produced by Albert S. Ruddy, based on Mario Puzo’s best-selling novel of the same name. It stars Marlon Brando and Al Pacino as the leaders of a fictional New York crime family. The story, spanning 1945 to 1955, chronicles the family under the patriarch Vito Corleone, 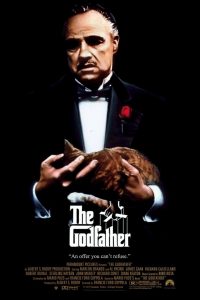 focusing on the transformation of Michael Corleone (Pacino) from reluctant family outsider to ruthless Mafia boss.
The film was the highest-grossing film of 1972 and was for a time the highest-grossing film ever made. It won the Oscars for Best Picture, Best Actor (Brando) and Best Adapted Screenplay (for Puzo and Coppola). Its seven other Oscar nominations included Pacino, James Caan, and Robert Duvall for Best Supporting Actor and Coppola for Best Director. It was followed by sequels The Godfather Part II (1974) and Part III (1990). The Godfather is widely regarded as one of the greatest films in world cinema and one of the most influential, especially in the gangster genre. It was selected for preservation in the U.S. National Film Registry of the Library of Congress in 1990, being deemed “culturally, historically, or aesthetically significant” and is ranked the second-greatest film in American cinema (behind Citizen Kane) by the American Film Institute.