Top Five – The best movies ever made (2)

It ‘s very difficult to list the best films of all time. If you look on the internet you will find that any analysis or market research identifies not the same movies. We have tried to choose five films that represent different ages and different types. Here’s the list of the films that we believe are the most beautiful, the most important, the most significant of all time. The texts are freely taken from Wikipedia.com.

This is the second part of the mail list. To return at the first page: Page 1 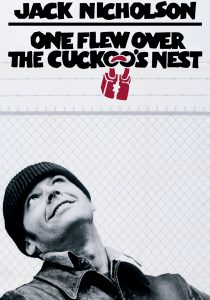 and features a supporting cast of Louise Fletcher, William Redfield, Will Sampson, and Brad Dourif. Considered to be one of the greatest films ever made, One Flew Over the Cuckoo’s Nest is No. 33 on the American Film Institute’s 100 Years… 100 Movies list.

The film was the second to win all five major Academy Awards (Best Picture, Actor in Lead Role, Actress in Lead Role, Director, and Screenplay) following It Happened One Night in 1934, an accomplishment not repeated until 1991 by The Silence of the Lambs. It also won numerous Golden Globe and BAFTA Awards. In 1993, the film was deemed “culturally, historically, or aesthetically significant” by the United States Library of Congress and selected for preservation in the National Film Registry.

The Mission is a 1986 British drama film about the experiences of a Jesuit missionary in 18th century South America. Written by Robert Bolt and directed by Roland Joffé, the film stars Robert De Niro,

Jeremy Irons, Ray McAnally, Aidan Quinn, Cherie Lunghi, and Liam Neeson. It won the Palme d’Or and the Academy Award for Best Cinematography. In April 2007, it was elected number one on the Church Times’ Top 50 Religious Films list. Furthermore, it is one of fifteen films listed in the category “Religion” on the Vatican film list.

The music, scored by Italian composer Ennio Morricone, ranked 1st on the Australian Broadcasting Corporation’s (ABC) Classic 100 Music in the Movies. Despite mixed to positive reviews from critics, the film (along with Absolute Beginners) bombed at the box office and caused the deterioration of Goldcrest Films.

Forrest Gump is a 1994 American comedy-drama film based on the 1986 novel of the same name by Winston Groom. The film was directed by Robert Zemeckis and stars Tom Hanks, Robin Wright, Gary 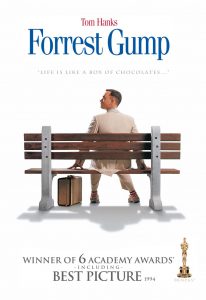 Sinise, Mykelti Williamson, and Sally Field. The story depicts several decades in the life of Forrest Gump, a slow-witted but kind-hearted, good-natured and athletically prodigious man from Alabama who witnesses, and in some cases influences, some of the defining events of the latter half of the 20th century in the United States; more specifically, the period between Forrest’s birth in 1944 and 1982. The film differs substantially from Winston Groom’s novel, including Gump’s personality and several events that were depicted. Released in the United States on July 6, 1994, Forrest Gump became a commercial success as the top-grossing film in North America released in that year, being the first major success for Paramount Pictures since the studio’s sale to Viacom, earning over US$677 million worldwide during its theatrical run. In 1995 it won the Academy Awards for Best Picture, Best Director for Robert Zemeckis, Best Actor for Tom Hanks, Best Adapted Screenplay for Eric Roth, Best Visual Effects, and Best Film Editing. It also garnered multiple other awards and nominations, including Golden Globes, People’s Choice Awards, and Young Artist Awards, among others. Since the film’s release varying interpretations have been made of the film’s protagonist and its political symbolism. In 1996, a themed restaurant, Bubba Gump Shrimp Company, opened based on the film and has since expanded to multiple locations worldwide. The scene of Gump running across the country is often referred to when real-life people attempt the feat. In 2011, the Library of Congress selected the film for preservation in the United States National Film Registry as being “culturally, historically, or aesthetically significant”. 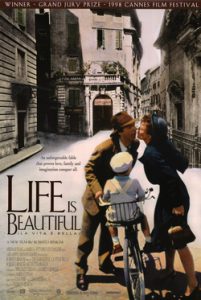 i plays Guido Orefice, a Jewish Italian book shop owner, who employs his fertile imagination to shield his son from the horrors of internment in a Nazi concentration camp. The film was partially inspired by the book In the End, I Beat Hitler by Rubino Romeo Salmonì and by Benigni’s father, who spent two years in a German labour camp during World War II. The film was a critical and financial success, despite criticisms of using the subject matter for comedic purposes. 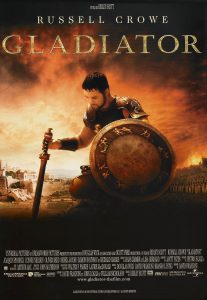 his death), Djimon Hounsou, Derek Jacobi, John Shrapnel, and Richard Harris. Crowe portrays the fictional character, loyal Hispano-Roman general Maximus Decimus Meridius, who is betrayed when Commodus, the ambitious son of Emperor Marcus Aurelius, murders his father and seizes the throne. Reduced to slavery, Maximus rises through the ranks of the gladiatorial arena to avenge the murders of his family and his emperor.

The film was released in the United States on May 5, 2000, and grossed $457.6 million worldwide. The film won multiple awards, including Best Picture, Best Actor for Crowe, and three other Academy Awards at the 73rd Academy Awards. It has also been credited with rekindling interest in the historical epic.

Discover the best-selling albums of all time: